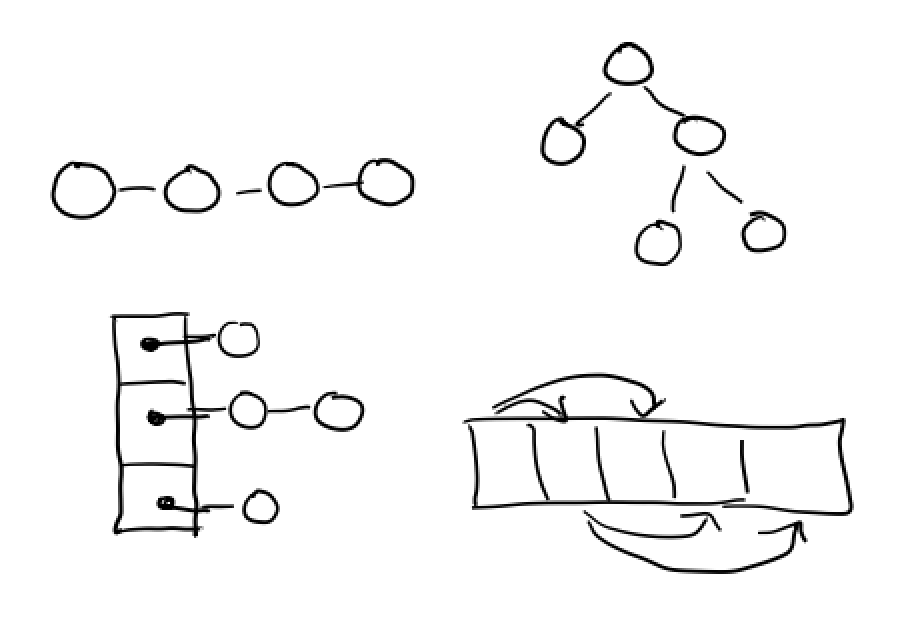 In this assignment you’ll implement a variant on the Map interface using the adapter pattern. You’ll use the implementation to build an n-gram viewer, which shows data about common words and phrases in text over time.

You can get the starter code here:

Part I: An Implementation of DefaultMap

You’ll provide a fast implementation of an interface called DefaultMap in DefaultMapImpl.java. You can implement it however you like, but we recommend using one of Java’s built in Map implementations (like HashMap or TreeMap) with the adapter pattern.

In addition, if null is provided as the default value, any attempt to get a key that isn’t set should result in a NoSuchElementException:

You will implement all the methods defined in the DefaultMap interface. You must ensure that each has the specified big-O bound in the average case, and argue why based on the documentation of any libraries you use, or based on your implementation. Note that these are big-O bounds, so doing better (like O(1) where O(log(n)) is required) is acceptable. In each, n represents the number of entries in the map.

DefaultMapImpl should have a single constructor that takes one argument (the default value).

Their specifications are defined in header comments in the DefaultMap.java file, which you should follow. You may use any methods on in the Java collections library to implement them (including helpers like Collections.sort). If you don’t know how to use a particular library method, interface, or class in the standard Java utils, ask! This is an opportunity to learn about the built-in libraries. You may find these useful:

The pages linked from those may also have useful information. Your implementation of DefaultMap will be graded automatically by tests that we provide. We’ll provide a subset of the tests in the grader.

One way that text is analyzed is by breaking it into n-grams and counting the frequency at which various n-grams appear. Breaking this data into a time series is particularly interesting – how do particular terms change in frequency in documents over time?

The data is a sample of English language from the years 1990 to 2012, containing a few million words in total. It is the COCA sample from this web site. It is laid out in plain text files within a single directory, and the filenames all have the format:

Where <type> says something about the source of data (interesting, but not relevant for the assignment), and <year> says what year the data is from. For example w_mag_1991.txt contains snippets of text from magazines in 1991, and w_fic_2002.txt contains snippets from fictional works in 2002.

The files themselves each contain several lines with text and other formatting characters on them, for example:

You’ll notice a few things about the format:

This format where be your source for retrieving the n-grams from the data set, and these files are all in the directory data/ included with your repository. Your program will consume this data and produce graphs like this:

That is, a user can type in multiple n-grams separated by semicolons, and your program will produce a graph that shows the relationship.

You must implement the two following methods:

The idea here is that generateDatabase produces a useful structure that can be efficiently queried later to produce a graph.

generateDatabase should map from years to maps from n-grams to counts. That is, the structure might represent something like:

The Path that generateDatabase takes as an argument should be a path with a directory structure like data. The expectation is that the directory holds files of the shape described above (w_<type>_<year>.txt). The generateDatabase method should read all the files in this directory (see “Reading Files” below), split them up on word boundaries, filter out non-word strings (see “Filtering Strings” below), and build a map as described above.

You should add all 1- through 3-grams in the documents to the map (ignore grams of 4 and above). Note that there are multiple files from each year, for example both w_acad_1990.txt and w_fic_1990.txt represent text from the year 1990. You should make sure to include n-grams from all the files corresponding to a given year in the map for that year.

We will test your generateDatabase with other directories than the given data directory, and you may find it useful to do so as well. The test data we use will have the expected layout above.

Once you’ve built the database, you can use it to ask interesting questions, like how many times a several particular n-grams appeared in each year from 1990 to 2012 in the dataset. We’ve provided you with a class Graph that uses an open-source chart library to draw the graphical elements, but it needs to be constructed with the right input data to work. You will write makeGraph to take a database of the shape constructed by generateDatabase along with a query as an array of n-grams, and produce the corresponding Graph.

A query is an array of n-grams to plot, so, for example, to query for the n-grams “is a” and “has a”, the array argument would be:

The individual n-grams themselves are represented simply as space-separated words.

The goal of makeGraph is to construct a Graph, whose constructor has the following signature:

The Graph constructor can then plot the information (see “Plotting” below). Note that for the automatically graded part of the assignment, we will simply check that you created the correct Graph object.

You’re free to read in the files in any way you like. We found the following methods particularly useful:

The data within each file has extraneous information in it. For example, there are sequences of @ signs separating passages, punctuation like ., and paragraph markers like <p>. In addition, some words are in uppercase and some are in lowercase. You should filter out this extraneous information to get the most useful sequence of n-grams you can.

This process not be graded automatically, but by reading your code and your argument for it. You should argue in your README about why your filtering rules were good (see the README section below). Note that this requires exercising your judgment, which we cannot do for you, so “Is this filtering rule OK?” kinds of questions need to come with an argument. We will autograde your submission on pre-filtered data that doesn’t have this extraneous information, so that your filtering rules won’t affect that part of your grade.

A reasonable approach to this is to break up each line on spaces to produce an array or list (using String.split), and then remove some of the space-separated strings according to string matching rules you develop. Some things to think about:

Note that when we test your code for correctness, we’ll focus on providing input that is in all lowercase with no punctuation. The string filtering you do will be graded manually and based on your arguments and judgment.

You will also implement a main method that:

So, before the loop you should use generateDatabase once to create the data to query, then you can start the loop, and use makeGraph to show the responses.

This allows you to interactively explore relationships – this is a pretty useful data exploration tool! If you wanted to take this further, you could expand the set of data files you read in, you could build a visualizer for data from many different sources.

You will write a README to answer the following questions:

This PA has the same style guidelines as PA5.

There is no bad implementation testing on this PA. However, we highly recommend you use the practices you know from testing to thoroughly check that DefaultMapImpl and the n-gram helpers you wrote work as expected.